Since 2010, when Shoah Film Collection and its 1st open call were lauched on 27 January ( International Holocaust Memorial Day – Liberation of the Concentration Camp Auschwitz), traditionally on the next following 9 November (commemorating the “Night of Broken Glass” – “Reichskristallnacht” which is considered to be the start of the Holocaust) the results of the open call, eg new additions to Shoah Film Collection are released.

So also in 2016, when the results of the 7th open call in sequence are published on 9 November, consisting this time of 3 components:

1. extension of the video collection: the 19 videos selected from the 120 submissions
2. extension of Shoah Film Collection Interview Project: 6 new interviews
3. SFC Blog: Article by Dova Cahan spotlighting the Ferramonti camp and the making of the latest film dealing with the concentration camp in Calabria. 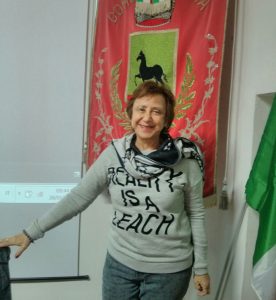 Ad 3. Dova Cahan about her film dealing with her visit in Ferramonti of Tarsia and her film
more details on http://dts.engad.org/blog/?p=407